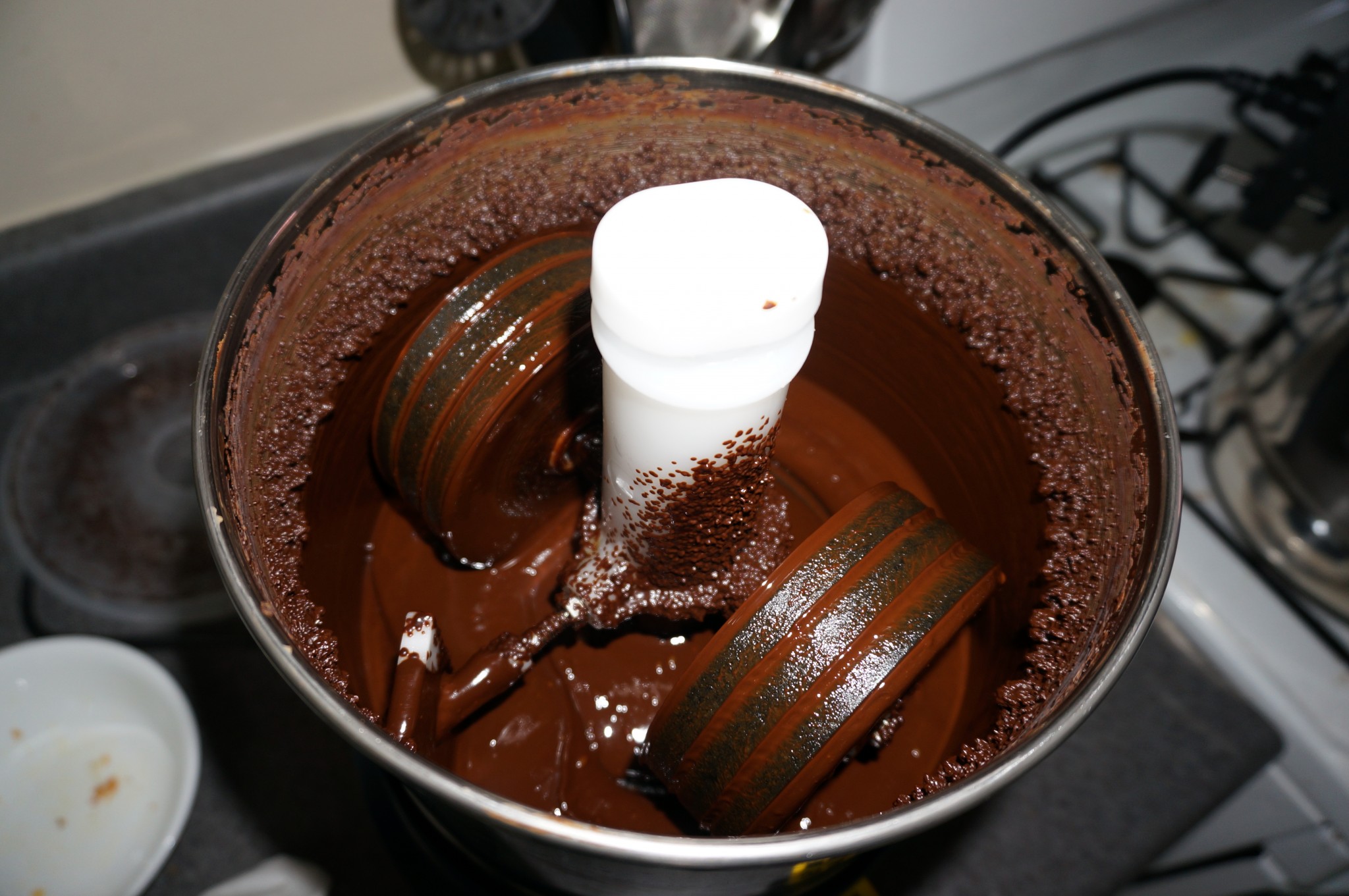 ChefSteps has a unique recipe for dark matter: chocolate made with coffee beans instead of cocoa beans. After making the chocolate, I’d like to discuss three issues I encountered:

You need a melanger to conche and refine the ingredients for dark matter into a silky smooth texture.  However, a chocolate melanger is too specialized and too expensive for a home kitchen.

Chocolate Alchemy is a great resource for learning about how to make chocolate at home.  They found the Premier Wonder Table Top Wet Grinder to be an excellent alternative to expensive melangers.  Its direct drive motor was a workhorse that stayed cool through the entire process.  Note: before first use, clean the grinder by running it with plain oil and sugar.  This will break in the stones and remove any residual dust.

What percent is this chocolate and how does it compare to real chocolate?

Most commercial dark chocolates are around 70%.  Dark matter increases the bitterness compared to regular chocolate by reducing the cocoa butter and adding in sharp tasting coffee oil and solids.  In the next iteration, I would experiment with a 65% chocolate by adding more sugar and cocoa butter.  I would also consider adding milk solids to make milk dark matter.  Adding sugar and cream will hopefully make it more palatable, just like regular coffee.

Can the chocolate be tempered?

ChefSteps’ recipe did not say anything about tempering the chocolate.  Tempering manipulates chocolate’s temperature to ensure proper cocoa butter crystallization, which is necessary to create good snap, gloss, and texture.  Chocolate alchemy provides a good explanation of the tempering process here.

I tried tempering the chocolate using sous vide as described by The Food Lab:

I had mixed results, as the dark matter didn’t have much gloss or snap.  How might using coffee beans affect the tempering process?

Cocoa butter has a high melting point (34-38 C) because its component fatty acids have high melting points.  Stearic, palmitic, and oleic acid are relatively linear molecules, which allows them to pack tightly together and have close intermolecular interactions.

Coffee oil has a low melting point (8-9 C) because it’s majority linoleic acid, which has a “bend” in the molecule that creates weaker intermolecular interactions.

Dark matter reduces the cocoa butter by 10% and adds 7% coffee fat.  Adding coffee fat lowers the mixture’s melting point, which would throw off all of the temperatures used in traditional tempering guidelines based on pure cocoa butter.

The addition of unsaturated linoleic acid may also affect the mono-, di-, and tri-glyceride composition, which is responsible for cocoa butter’s hardness (described here, here, and here).  I’m not a chemist or food scientist, so I’m only guessing, but the addition of coffee oil may prevent the usual crystal polymorphism, which would mean it would remain soft, somewhat like coconut oil at room temperature.  Please email me if you know how this works.

Add the liquid cocoa butter into the wet grinder first.  Let it run for a few minutes to lubricate the grinding stones.  Slowly add the dry ingredients until well incorporated.  Scrape down the sides every few hours to ensure even grinding.

After 24 hours of continuous grinding the chocolate turns into a shiny, silky smooth liquid chocolate.  The whole house smelled of wonderful fresh roasted coffee.  Taste testing the liquid, I thought it was very flavorful.  It only became unpleasantly bitter when it solidified, perhaps because the amount consumed was much higher than a small lick of the spoon.

I sealed the chocolate in a plastic bag and tempered using the sous vide method as described above.

The plastic bag is a convenient piping bag.  I cut a corner and piped the chocolate into some silicon molds.

Unfortunately, the tempering was poor.  The chocolate was only semi-glossy and didn’t have good snap.  In addition to the coffee oil issues outlined above, perhaps I didn’t give it enough time in the 81F and 90F stages to let the cocoa butter crystallize.

If I were to remake this, I would want to learn more about how the coffee oil is affecting the crystal polymorphism of cocoa butter so I could adjust the tempering accordingly.  Alternatively, I might just use it in liquid form and enrobe strawberries so that the sweet berries can offset the bitter coffee.  I would also experiment with increasing the sugar, cocoa butter, and milk solid percentages.  A pure piece of dark matter as currently described is too bitter by itself.

However, I am more interested in applying this technique to make other forms of chocolate.  There are many ingredients that have similar flavor profiles to roasted coffee, like roasted barley or roasted brown rice.  I’d like to make a genmaichacolate, using conched genmai tea.  The upside of genmaicha is that it wouldn’t introduce any other oils with different fatty acid profiles, so the tempering guidelines would still hold.