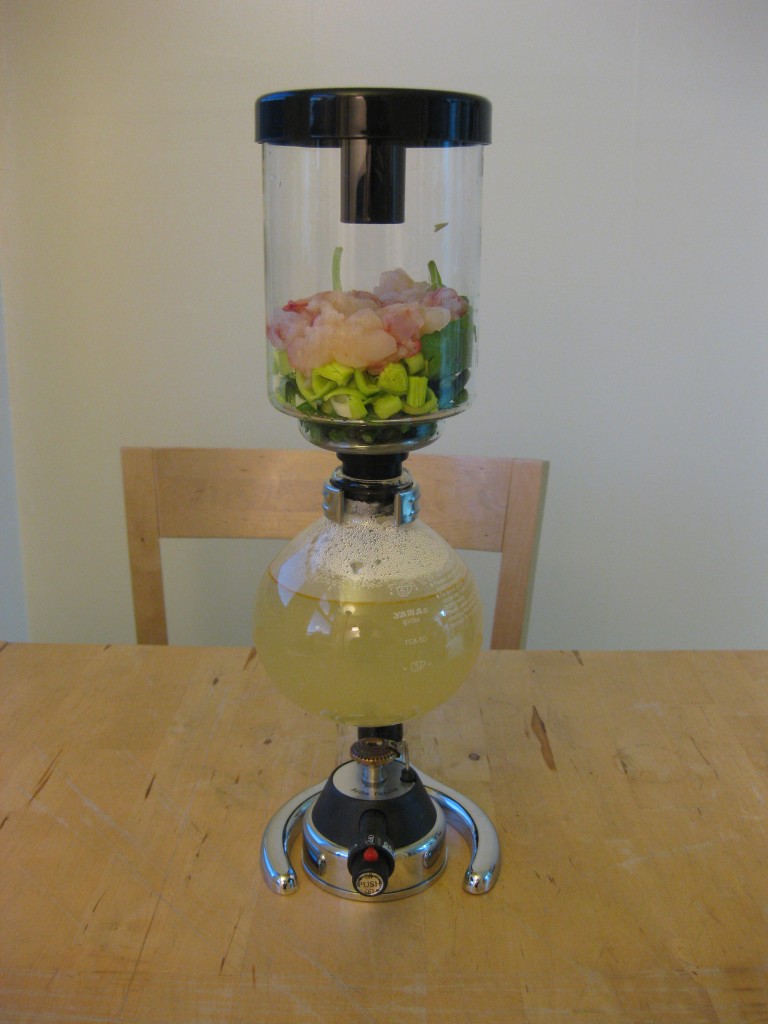 Here’s the recipe as listed in the Akelare book.  My notes and substitutions are in parentheses.

Cut the remaining body in half, lengthwise. Rinse out the brains and guts, remove the gills. Dry fry the body in a pan until the insides are golden brown (I used olive oil).

After 2.5 hours, pour the hot stock into the bottom of the coffee siphon. The stock should be close to 95 deg C so that it won’t take long to boil once it’s at the table. Place the veggies and lobster into the top of the siphon.

Turn on the flame and wait for the stock to rise into the upper part of the chamber. Cook for 2-3 minutes, then turn the flame off.

The coffee siphon is a fun table-side presentation. The liquid starts in the bottom. As it begins to boil, the vapor pressure of the steam forces the liquid into the upper chamber, where it becomes infused with the flavor of the ingredients. When the flame is reduced or turned off, the vapor pressure subsides and the liquid rushes back into the lower chamber. The roar of the butane burner and the heat of the open flame is theatrical.

Take the lobster and veggies out of the upper chamber and arrange in a bowl. Pour some broth into the bowl and pour some into a glass to drink on the side while eating.

This is probably the most fun thing I’ve made so far. It tastes great – the lobster is tender and the broth is flavorful, light, and refreshing. It’s an entertaining and impressive presentation.