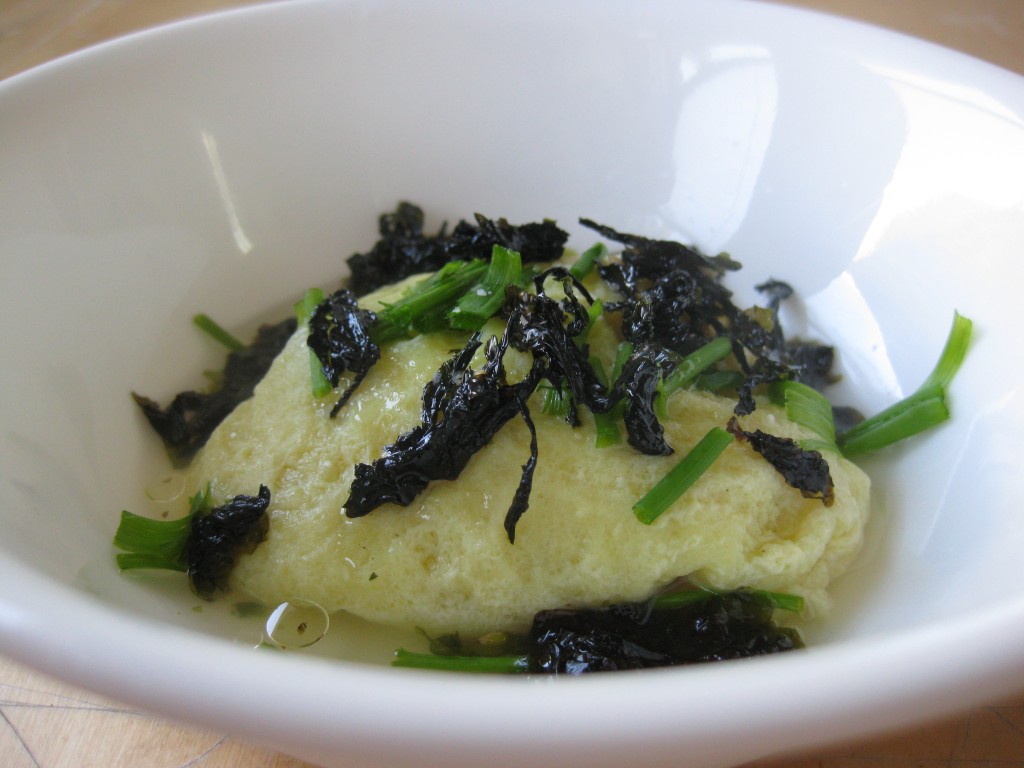 Chef David Chang made Momofuku Ko’s Puffed Egg in episode 9 of The Mind of a Chef, but the show did not provide a complete recipe. After some research and experimentation, here’s the recipe I compiled for my adaptation:

The bacon dashi recipe is from the Momofuku book. You’ll need:

For the puffed egg you’ll need:

I tried to salvage the boiled bacon by frying it, but there was no bacon flavor left. Throw the bacon away unless you like the taste of plain fried pork fat. The dashi, however, is very good. It captured all of the smoky bacon flavor, mixed with the konbu’s umami.

Here’s where I’m not sure if I did the optimal thing. Like all hydrocolloids, methylcellulose needs to be hydrated before use. Methylcellulose is usually hydrated by blending it into hot water because it dissolves and disperses more readily in hot water than in cold water. However, I didn’t want to add water to the eggs because it would change the ratio of egg proteins, water, and hydrocolloid in a way I couldn’t predict. So I blended the methylcellulose directly into the cold eggs with an immersion blender. I sheared the eggs until there were no clumps of methylcellulose left. There was a gel residue left on the surface of the immersion blender, so I added more methylcellulose to the eggs to account for this loss. Hopefully I added enough back in for the eggs to gel properly.

Pour the eggs into the siphon and charge with a N2O cartridge. Chop the chives into longish pieces and take some roasted seaweed out of the bag.

Bring 2 cups of bacon dashi to a roiling boil in a pot. Shake the siphon well and dispense the eggs into the water. Cover the pot to steam the eggs for 30-60 seconds, basting with the broth at the end like he does in the video.

I tried dispensing the eggs three different ways before I ran out of eggs. First, I dispensed the eggs all at once, hoping to build the eggs into a puff ball like in the video. That didn’t work because the eggs spread out across the surface of the dashi. On my third try, I dispensed a small amount of eggs to form an “egg raft” that floated on top of the water. I let the raft sit in the dashi for a few seconds so the bottom of the “platform” could gel. Then I dispensed the remaining eggs onto the raft. This way, the egg foam has a chance to puff vertically on the solid raft, rather than horizontally across the water.

To finish, take the puffed egg out of the pot and place into a bowl. Pour some of the bacon dashi into the bowl. Sprinkle the egg with chives, roasted seaweed, and kosher salt. Drizzle with white truffle oil.

My egg was light in texture, but it was not as puffy or spherical as it was on the show (screen capture below). Perhaps they hydrate the methylcellulose in a different manner. Or perhaps Chang is telling the truth in the video when he says “It’s the best one I think I’ve ever done in my life.”

Here’s another pic of the puffed egg from an actual service at Momofuku Ko. It is definitely flatter than the the one Chang made on the show. Mine appears to be somewhere in between the two examples.

Although I’ve never had the dish at Momofuku Ko, I wasn’t impressed with what I made. The sum was less than the parts. I like the idea of egg, bacon dashi, roasted seaweed, truffle oil, and chives.  They all have strong flavors individually. However, while the egg was puffy, it was also soggy from the broth, which somehow muted everything. None of the flavors popped on the palate, which was unfortunate. Still, it was an interesting technical exercise.