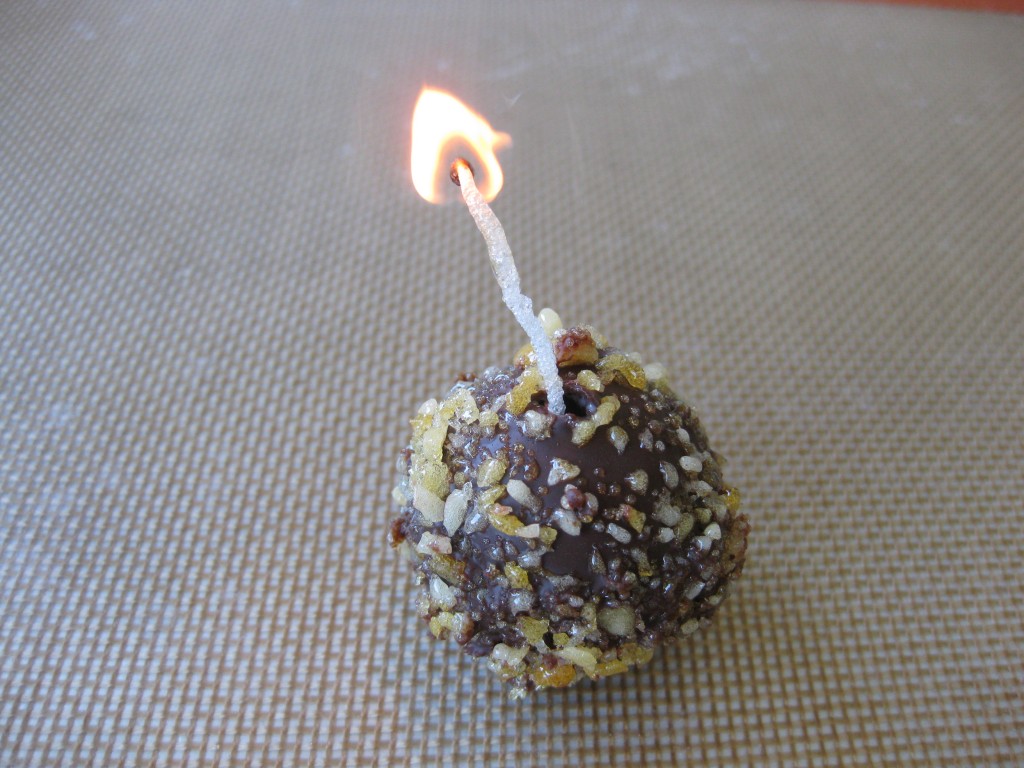 A “chocolate smore bomb with pop rocks shrapnel” is my combination of moto restaurant’s smore bomb and Modernist Cuisine’s exploding chocolate. It’s a liquid graham cracker contained within a chocolate shell, covered in pop rocks, and finished with a “marshmallow” fuse. Light the fuse, wait for it to completely burn down to the chocolate, and then eat the smore bomb as a single bite. The liquid graham cracker unleashes a flood of smore flavor while simultaneously setting off little pop rock explosions in the mouth. It’s a literal and figurative explosion of flavor. Let’s see how to make each item individually and then how to make the final product. Exploding chocolate is a very simple idea with excellent results. By adding rice krispies and pop rocks to chocolate, we’re making a Nestle Crunch bar with a hidden surprise.

Melt the chocolate and butter in a microwave and mix together until smooth. Stir in the rice krispies and pop rocks. Spread onto a non-stick surface to cool. moto’s smore bomb was part of the 16 course menu shown in the video below. I love moto’s creativity. Place the graham cracker puree ingredients into a blender and blend for 1 to 2 minutes until the puree becomes warm so the fat from the graham crackers can emulsify with the milk. I blended for three 50-second cycles at speed 10 on the blendtec. Pour the puree into the ice mold and then freeze overnight. Remove the frozen graham cracker balls from the mold and press a wooden skewer into each ball. Holding the skewer, dip each ball into the chocolate to completely cover it. The chocolate will harden quickly, so rotate the ball to ensure an even coat. Place the ball with skewer still attached into the refrigerator for 3 hours to let the frozen graham cracker thaw. After the graham cracker has thawed, gently twist the skewer to remove it.

To create the wicks, heat the oil in a frying pan until it reaches 375F. Fry uncooked noodles until they puff up and become crispy. This happens almost immediately and is fun to watch because the straight noodles twist like crazy as they puff up. The picture below includes a pen as a size reference for noodle thickness. Break the noodles into 2 inch segments to form individual fuses. Place a noodle fuse into the hole left by the wooden skewer in the chocolate ball.