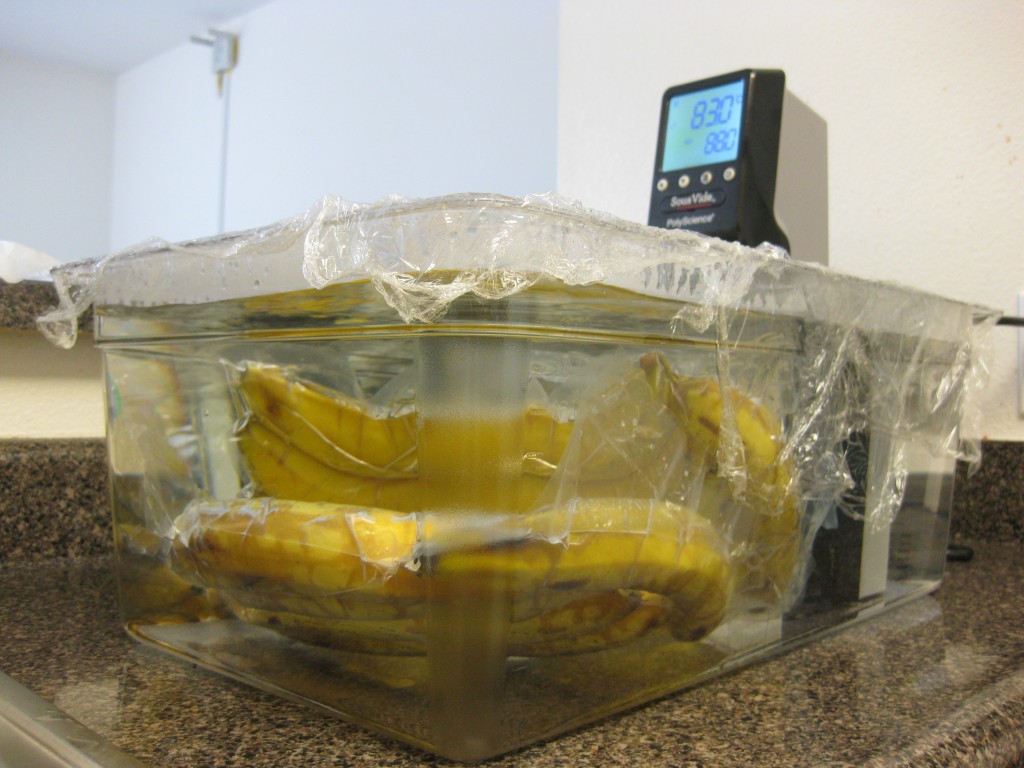 Jet City Gastrophysics recently photographed his 30 course dinner at the Modernist Cuisine Cooking Lab. Looking over the menu, I was curious about the centrifuged banana juice sorbet. How do you juice a banana?

Unlike pea butter and caramelized carrot soup (both of which were also on the 30 course menu), there is no recipe for banana juice sorbet in the Modernist Cuisine book. The banana yogurt recipe showed how to make banana juice; the basic technique is the same as the other dishes – use a centrifuge to separate the ingredient into its constituent parts and then put them back together in a novel way.

Going into this project, I had no idea what the banana juice yield would be. I decided to play it safe and buy 24 lbs of bananas from Costco. That should yield enough juice to work with, right?

The banana yogurt recipe calls for cooking the unpeeled bananas sous vide. I washed the bananas and then vacuum sealed them.

The Modernist Cuisine Cooking Lab freezes the bananas. Freezing the bananas creates ice crystals that break the cell wall, allowing water to escape when the bananas are thawed. I put the bananas in my freezer to freeze overnight.

The next step is to cook the bananas sous vide for 12 minutes at 88 dec C. I recently upgraded my sous vide setup. Instead of a tiny 4 cup rice cooker hooked up to a PID controller, now I have a real PolyScience Immersion Circulator with a 27 qt food container.

I put the frozen bananas (10 at a time) directly into the water bath. I added boiling water to counter the sudden drop in temperature and let the immersion circulator heat the water back to 88 deg C. I let the bananas sit in the bath for 5 minutes after the bath reached 88 deg C and then took the bananas out. The bananas were in the bath for 20-25 minutes, start to finish.

Taking the bananas out of the water bath, there is a already a lot of banana juice in the sealed plastic bags. The frozen bananas had expanded and cracked their peels open.

I peeled the bananas (hot!) and poured the juice into a blender to puree them. I might have underestimated how much juice a banana yields.

After centrifuging the pureed bananas at 1500g for 1 hour, the puree separated into three layers. The wavy layer did not pelletize at the bottom, so it kicked up when the centrifuge stopped spinning. It’s floating in the middle of the water layer.

I poured off the water/wavy layer into one jar and separated the solids into another. The solids continued oxidizing, which is why they are brown. The liquid remained a lavender color and was thick, syrupy and surprisingly sweet. Very banana-y.

I repeated this process with another 10 bananas. This time though, I had a secret ingredient to boost my juice yield: Pectinex Ultra SP-L. Pectinex Ultra SP-L is a pectinase enzyme that can further break down cell walls to release more water. It is added to wine to clarify the haze caused by pectin. Perhaps it could similarly clarify my banana juice.

Let the bananas cool down to 60 deg C (the optimum temperature for pectinase enzyme activity is 55 – 60 deg C). Add the 0.2% of pectinase to the bananas in the blender right before they’re pureed. Adding pectinase resulted in clear centrifuged banana juice. It’s just like water – not thick and syrupy like the previous results. The liquid tasted like pure bananas as well, but it was not as sweet as the syrupy water from the version without pectinase.

From ~1280 g of pureed bananas, I was left with ~800 g of water and ~480 g of solids. In this second experiment, I was able to capture 63% of the weight of the banana (sans peel) as water. Adding pectinase boosted the yield by 30% over freezing alone. Banana water on the left, solids on the right.

Comparing the banana juice from the two different methods – pectinase increases the yield, clarifies the juice, and increases the oxidation, turning the water brown.

UPDATE 7/17/12: I’ve solved the oxidation problem. I wasn’t cooking the bananas long enough to denature the browning enzymes. Instead of putting the frozen bananas directly into the sous vide bath, let them thaw in the fridge and then cook them in the bath for 20-30 minutes. This inactivates the browning enzymes, as you can see below, which makes the juice perfectly clear and far more visually appealing. It should also make the sorbet end product much lighter.

We have banana juice. Let’s make the accompaniments for the sorbet. First up: whipped cream. Pour 1 pint heavy cream, 2 tablespoons powdered sugar, and 1 teaspoon vanilla into an iSi whip. Shake to mix, then charge with a N2O cartridge. Shake vigorously, then place the whip in the fridge for later.

Although nutella is not part of the Modernist Cuisine version of the dish, nutella and bananas are such a classic pairing that I decided to add it to the recipe. I’ve been looking for an excuse to use my tapioca maltodextrin, so instead of using plain nutella, I made nutella powder. Tapioca maltodextrin will convert any fat, such as nutella’s hazelnut butter, into a powder. The nutella powder melts back into nutella in your mouth (or whenever it contacts water).

Pulse until it turns into a powder.

Here’s the powder up close. It’s amazing how the thick spread transforms into a light and dry powder.

Having made whipped cream and nutella powder, it’s finally time to make the sorbet. We need to make a simple syrup (shown right) to add to the pectinase-clarified banana juice (shown left) because sugar increases the syrup’s capacity to bind water (reducing unwanted iciness and improving texture), lowers the freezing point (improves scoopability), and increases shelf life. Sugar content is measured with a refractometer – sorbets are at their optimum when the reading is 24-26 brix.

Without a refractometer, I took a guess and mixed 1/2 cup of banana water and 1/4 cup of simple syrup in a small pot. Then I added liquid nitrogen to quickly freeze the sorbet. Ordinarily I would make the sorbet in a stand mixer, but the volume was so small that I stirred the liquid by hand. Important: never place a metal bowl or pot that contains liquid nitrogen directly on the countertop. The huge temperature differential will crack the counter. Always place the bowl on an insulator like a wooden cutting board as I’ve done.

Liquid nitrogen is great because there’s no waiting time for the sorbet. It aerates the sorbet as it boils off (shown below). It also flash freezes the liquid, which keeps the size of the ice crystals small, creating an incredibly smooth sorbet or ice cream.

Scoop out the sorbet, shape it into a quenelle using two spoons. This is the first time I’ve made quenelles, so I apologize for my egg shapes. The sorbet made with the pectinase-clarified banana juice tasted like banana, but it wasn’t sweet enough. The sweetness of the cane sugar tasted different from the banana’s natural sweetness. The sorbet wasn’t icy, but it seemed like it was too watery or thin, something I’m not sure adding more simple syrup can correct.

Back to the original banana juice – the syrupy version without the pectinase added. I decided to make the sorbet straight from this juice without adding simple syrup. I think the simple syrup is added to the water in a traditional sorbet to increase its specific gravity. Since this banana juice was already thick, it had a high specific gravity. It already tasted sweeter than a natural banana and did not need any additional sugar in my opinion.

Now this is perfect. This sorbet was sweet and had an intense banana flavor – the frozen essence of the banana. It had better mouth feel than the previous version because it was creamier and had more body. All of the flavor of the banana was there with none of the starchiness of a normal banana. The whipped cream and the hint of nutella as the powder melts in your mouth was excellent.

I haven’t had the Modernist Cuisine Cooking Lab’s version, so I can’t compare the flavor, but there’s still work to do. I can experiment with the pectinase version and add a small amount of banana solids to reintroduce some creaminess. I could also increase the simple syrup to increase the density, but then add lemon juice to counteract the sweetness. Finally, I’d like to improve on my quenelles.