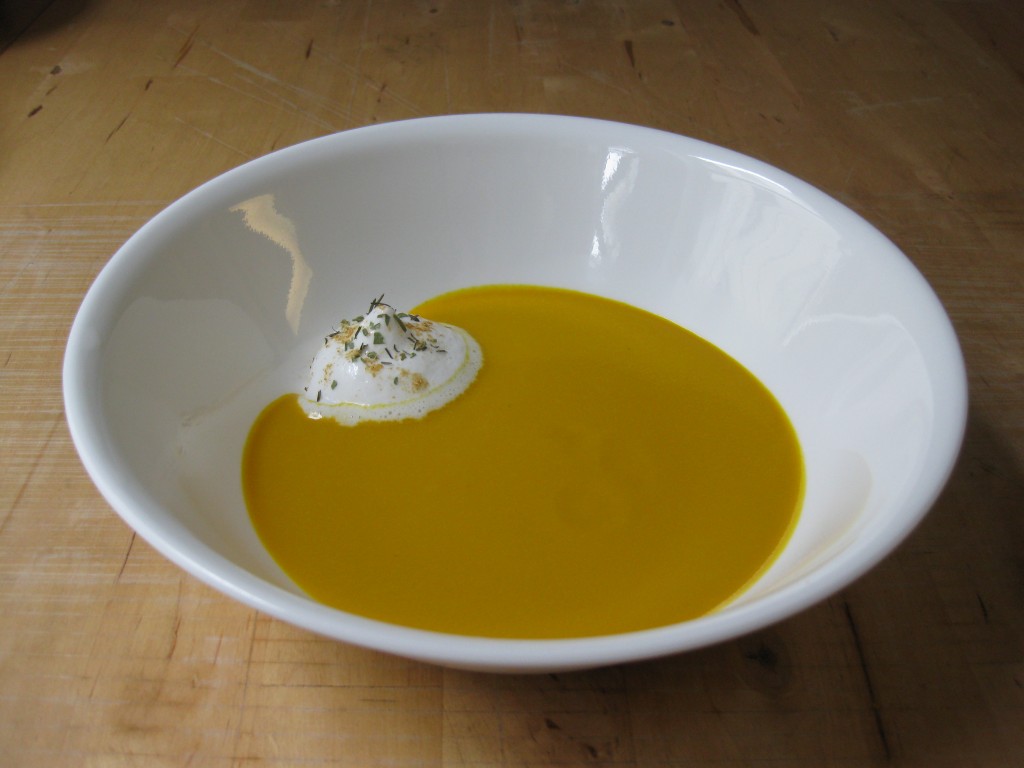 I bought a new pressure cooker and the first thing I made with it was Modernist Cuisine’s caramelized carrot soup. They suggest pairing the soup with a coconut chutney foam, but instead of using their recipe I went with the coconut foam from molecular recipes. This dish literally took me all day to make, but it was worth the time and effort.

9:19AM – Finished washing and peeling all of the carrots.

9:29AM – The recipe says, “Make sure to core your carrots. The soup will be sweeter, as the cores tend to carry a bitter aftertaste.” I’ve never cored a carrot before, but I figured the thicker parts would be the easiest to handle. So I chopped the carrots and sorted them by thickness.

A cutaway of the carrot. Cut around the core shown by the inner circle.

The recipe calls for carrot juice. I do not have a juicer, but I have a blender and a centrifuge. Blend all of the leftover cores and uncored carrots in the Blendtec.

10:20AM – I really need to get a Blendtec wildside jar to make blending easier. An hour and a half in and 10 pounds of carrots have been transformed into carrot mash and 1000 g of cored carrots. I put the mash into the centrifuge to separate out the carrot juice.

11:15AM – After running in the centrifuge for an hour, the juice has risen to the top. Pour off the juice and then push the mash through a fine sieve to extract as much juice as possible. I ended up running the mash through the centrifuge a second time to see if I could get more juice, but there was none left to extract. Next time I will skip the second centrifuging and save some time. I was left with 789 ml of carrot juice. A real juicer will probably give a better yield, considering how many carrots went into making this juice.

The recipe calls for a lot of butter. While the centrifuge ran the second time I poured 1 qt of heavy cream into my mixer and churned fresh butter. Freshly-churned butter always tastes sweeter than store-bought butter.

1 qt of heavy cream made approximately 375 g of butter (I can’t remember the exact number).

2:06PM – After a break for lunch and errands, I started on the coconut foam. Make a simple syrup by mixing 2 tablespoons of sugar with two tablespoons of water.

Heat the syrup back up, pour in the gelatin/coconut milk and stir until it dissolves.

2:27PM – Mix the heated mixture into the remaining coconut milk. Pour into iSi whip, charge with a N2O cartridge, and place in the refrigerator to cool.

~4:00PM – After preparing the coconut foam, I went to Arizmendi to pick up some bread. I thought I had plenty of time before dinner, since I had the carrot juice, the butter and cored carrots ready to go. I reread the recipe for the carotene butter and that’s when I realized the clarified juice came from the carotene butter recipe. I scrambled back into gear because I still had a long way to go.

Take the carrot juice (789 ml) and butter (500 g) and bring it to a simmer on the stove. The recipe says to let it simmer for 30 min, but I only brought it to a simmer (180 deg F) and then immediately took it off heat because I missed those directions in my haste. In the end, I don’t think it made much difference because I think the primary purpose of the simmering step is to denature the proteins in the carrot juice so they clump together and precipitate out of the juice. You can see they’ve started to do that in the picture below (4:24PM).

6:43PM – After centrifuging this carotene butter mixture for two hours, the butter is on top, the clarified carrot juice is in the middle, and the solids are at the bottom. The recipe says to leave the butter in the refrigerator for a few hours so the butter layer hardens, but I accelerated the process by putting the butter in the freezer.

7:43PM – The carotene butter has been hardening up in the freezer for the past hour. Time to start pressure cooking the carrots. Melt 80 g of unsalted butter in the pressure cooker, add 7.5 g salt, 500 g cored carrots and 2.5 baking soda. Here’s the carrot mix before pressure cooking:

8:09PM – And here’s the carrot mix after being pressure cooked at 15 PSI for 20 minutes. The carrots have browned and caramelized nicely. Put the cooked carrots into a blender and blend until smooth.

8:40PM – Time to plate. Dispense some coconut foam with the iSi whip on the edge of the bowl. The modernist cuisine recipe calls for diced young ginger, finely minced tarragon, lightly crushed ajowan seed and licorice powder. I dusted the coconut puff with dried ground ginger, dried tarragon and thyme (subtituting for ajowan).

I did not dilute the soup with water, as I liked the viscosity as it was. It was rich and sweet, almost tasting more like candied yams rather than carrots. Considering no sugar was added to the carrot mix, I can’t believe how sweet it tastes. The coconut puff and herbs add a great contrast to the soup, in texture, flavor, and temperature, but the soup is the star of the show. It was completely worth the 12 hours it took to make (can shorten next time).

This dish deconstructs a carrot into caramelized cored carrots, clarified carrot juice, and carotene butter. It then puts it all back together again, with the flavor being more than the sum of the parts. It’s amazing how this magnitude of flavor can emerge from just two main ingredients – carrots and heavy whipping cream. This soup transcends the carrot and will knock your socks off.